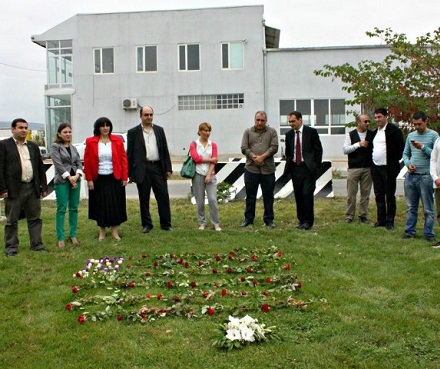 Outside the U.S. embassy in Tbilisi. (GYLA.)

TBILISI, DFWatch – NGOs gathered at the U.S. Embassy in Tbilisi to show their sympathy with the victims of the attack on American diplomats in Libya.

Members of Union of Human Rights Defenders brought flowers to the Embassy of USA and drew a U.S. flag by placing differently colored roses in the grass.

Participants said that they came to express their compassion with the victims of the attack on the U.S. embassy in Libya, an attack in which four diplomats were killed. One of them was Ambassador to Libya Christopher Stevens.

The consulate in Benghazi was attacked by a crowd outraged by an anti-Islam film called Innocence of Muslims. The film was made in America, and first appeared online on 1 July. Apart from Libya, it also outraged Muslims in Egypt and Iran.

The U.S. Embassy in Tbilisi thanked the NGOs for their solidarity.