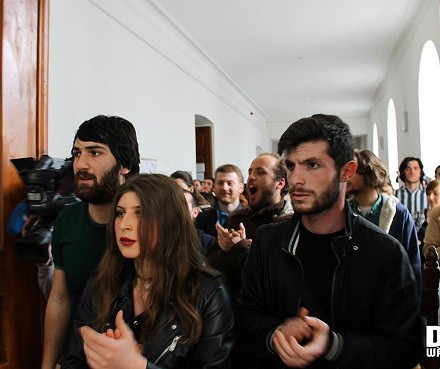 TBILISI, DFWatch–The student movement Auditorium 115, which sprang up a during a protest at Tbilisi State University (TSU) in March, claims that law enforcement bodies are putting pressure on them and their families. The State Security Service denies this.

Irakli Kupradze was the first member of Auditorium 115 to come forward with his story about being under surveillance. He said the police visited his family in Batumi in March and asked for information about other family members, and he thinks this was connected to the student protests he had been involved in.

Auditorium 115 wrote in a statement late on Monday that there is constant pressure from law enforcement bodies. Police are visiting families of activists every day and threatening them that if Auditorium 115 doesn’t give up its fight against the State Security Agents (ODRs), their family members will be fired from their jobs or even arrested.

Read our in depth article: What are ODRs?

“Due to threats, many activists cannot openly speak about this, considering the interests of their families, but several persons are ready to publicly speak about it now. For example the family of Natia Karchiladze has been threatened that if she doesn’t leave Auditorium 115, his father will be fired,” the statement reads.

In the statement, the group appeals to the government, the president, foreign diplomats, the public defender and international organizations, asking for their support and protection.

“The police regime which was established during the National Movement rule still exists today.”

Natia Karchiladze, from Auditorium 115, told Channel 1 that the police first showed up at the family of Irakli Kupradze. Meanwhile, the families of other student activists continued to receive threats. She said many of their friends cannot speak about this problem because they feel responsible for the fate of their family, but she says her family supports her in speaking up.

“An official in one of the municipalities called my father and told him to come to his workplace, where he was told that if his daughter wouldn’t give up fighting against ODRs he would be fired,” she said.

She accused the National Movement of establishing such a policy, which has continued also under the new government.

The State Security Service said briefly on Tuesday that it never puts pressure on students and if there are such cases they have to file a complaint about it.