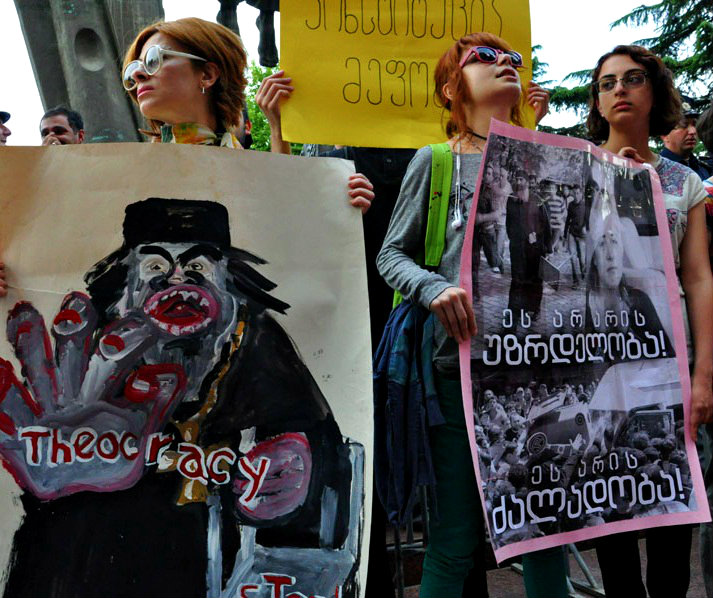 ‘No to theocracy’ said one part of the demonstrators. The other part wanted a ban on ‘homosexual propaganda’. (DFWatch photo.)

People gathered at 18:00 to protest against ‘propaganda of homosexuality’, while the other rally was ‘no to theocracy’ – a protest against the violent incidents which took place on May 17, when thousands of people encouraged by Orthodox clerics prevented LGBT activists from holding a peaceful rally against homophobia.

The police started gathering at Deda Ena square earlier on Friday. Policemen surrounded the whole square and organized corridors for participants of the No to Theocracy rally to separate them from the National Front rally and avoid confrontation.

There were no physical incidents during the rallies, but participants of the counter-rally verbally insulted people in the square by whistling and scolding and yelling in megaphones when someone arrived through the corridor, but they didn’t receive feedback from Deda Ena square.

The protest was attended by well-known singers, political experts, journalists, photographers, students and others, who brought posters saying ‘Democracy or theocracy,’ ‘SOS’, and ‘Theocracy is not democracy’.

Participants of the rally think all those who committed violence on May 17 must be punished, including those who are shown in many videos.

Later on Friday, Minister of Internal Affairs Irakli Gharibashvili and his deputies came to the rally and stayed there until both rallies were dissolved. He didn’t make comment for the media, but remained in the car until the rallies were finished and then left.

Members of National Front were disappointed because the police didn’t let them conduct their rally in Deda Ena square but outside it.

“But we observed our protest and we did it in peace,” Giorgi Gabedava, one of the organizers remarked.

“Those gathered in the square should know that police won’t always protect them,” he added.

Another rally is planned on Saturday outside the Prosecutor’s Office at 15:00 – ‘the law is supreme’ is the name of the rally, where majority of today’s rally from ‘no to theocracy’ plan to come.