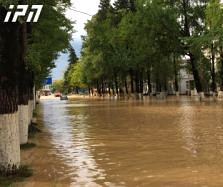 A flooded street in Kobuleti. (Interpressnews.)

TBILISI, DFWatch–Strong rain overnight Thursday caused flooding and landslides in the Adjara region, in the southwest of Georgia.

In Kobuleti, a Black Sea coastal resort, railway traffic was cut off and landslides triggered in the highlands.

According to the news agency Interpressnews, three public schools and three kindergartens in Kobuleti and nearby villages were closed, and in some areas authorities cut off electricity out of concern for public safety.

On Thursday afternoon, the rain stopped and the flood water has begun to subside.

In some areas of Kobuleti, the ground floors of houses have been flooded.

Rescue workers have been dispatched from the neighboring regions of Guria and Samegrelo.

A Batumi-Tbilisi commuter train had to halt at Chakvi station and return to Batumi. A Georgian Railways spokesperson told Interpressnews that the company will reimburse the tickets to all passengers.

Adjara, an autonomous republic in the southwest of Georgia, is the most humid and rainy region in Caucasus. Landslides are common here, partially due to massive deforestation and overuse of natural resources.