Strong rain and flooding of houses and streets in Gali, Abkhazia

Strong rain and flooding of houses and streets in Gali, Abkhazia 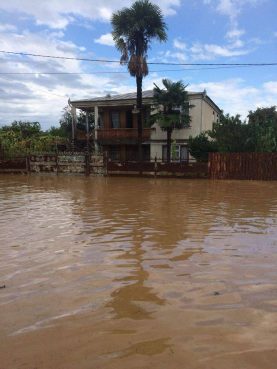 TBILISI, DFWatch–Strong rain caused flooding of streets and houses in the southern Gali district of Abkhazia on Friday.

The exact scale of the damage is not yet known, but the head of the local de facto administration claims the consequences would have been worse if they had not conducted large infrastructure projects last year.

“We all remember how disastrous floods there have been in recent years,” Temur Nadaraia, a local head of administration said on Friday. “Today the rain was so intense that I and my colleagues were unable to even go out of the administration building.”

The strong rain on Thursday and Friday also devastated many villages in other regions, especially Adjara and Samegrelo. Authorities even had to evacuate people from some villages in Samegrelo.

Streets in Batumi, one of Georgia’s main tourist destinations, were flooded as well.