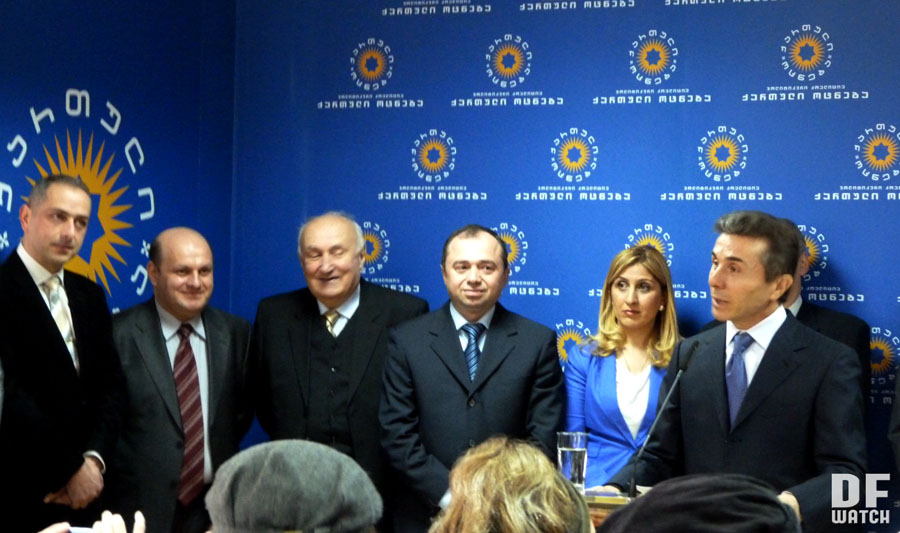 If Bidzina Ivanishvili fails to reclaim his Georgian citizenship, his wife will have to be the formal party leader. “They manage perfectly to manipulate with the law. This is Saakashvili’s democracy," he said at today's presentation of his party's new initiative group. Mr Ivanishvili far right, and to his left Eliso Chapidze, Archil Kvelashvili, and Ivane Kiguradze. Irakli Sesiashvili far left. (Photo: Mari Nikuradze.)

Among the members of the group are famous public figures, lawyers, a journalist, also famous people from sport and culture.

There has been some uncertainty around whether Mr Ivanishvili would be able to head the party himself, because four days after he declared that he would go into politics in October 2011, the president of the former Soviet republic revoked his citizenship.

That made it illegal for him to be involved in politics. But today the popular businessman told journalists that he is going to be the head of the new party, while his lawyers keep on trying to restore his citizenship.

If they don’t succeed, his wife Ekaterine Khvedelidze will head the party. Her citizenship was also revoked in October, but the lawyer’s partly won the trial into the Tbilisi City Court and her citizenship is now restored. The lawyers claim they have a special plan to restore Ivanishvili’s citizenship too.

“I decided to set up the political party and participate in the parliamentary elections in 2012. I made this statement on October 4, last year,” the businessman said, adding that he is sure his Georgian citizenship will be restored.

“They manage perfectly to manipulate with the law. This is Saakashvili’s democracy, but despite his characteristic and fantasy, even violation of the law has its limits.”

In mid December 2011 the Georgian football star Kakhi Kaladze declared that he would leave the national team in order to support Bidzina Ivanishvili’s newly established public movement Georgian Dream. In 2001 FC Milan paid 16 million Euro for his transfer and he was the most highly paid Georgian football player. His statement caused concern within the Georgian Football Federation.

After eighteen years being a journalist Eliso Chapidze also decided to leave her beloved sphere and she agreed to a proposal of cooperation she received from Bidzina Ivanishvili.

In the newspaper Rezonansi, where she has been editor for years, she published an open letter about her decision to leave journalism.

“I thought a lot and decided to go to a war, the rules of which I don’t really understand, but I know that there are people, just like the other places; you shouldn’t try to overstep someone but find a corner from which you better will be able to serve your country,” she writes.

“I support liberal democratic principles, which Mr. Bidzina declared at first on the action arena,” Archil Kbilashvili, lawyer and new member of the initiative group said as he explained the reasons he joined the team.

Irakli Alasania, the leader of the Free Democrats and already one of Bidzina Ivanishvili’s partners, told journalists after today’s meeting that soon they will begin preparing for the elections. He also said that soon the manifest of their coalition will be published, which will make clear the coalition’s views about the future of the country.

“There is one question towards the state arrangement, but these are the issues which the Georgian society will decide by referendum,” he said, adding that the coalition members have common views in other issues like the court system, economic and agriculture development.

The Free Democrats wants Georgia to be a strong presidential republic, while the Republicans support the parliamentary model arrangement of the country.

“With our team I am sure we will defeat the National Movement and will transfer them into the minority for the future parliament,” Alasania added.

“Personally I am very optimistic. The way we [go forward] now will be of a political nature, through elections,” foreign policy team leader Tedo Japaridze said, thereby reiterating what Ivanishvili has made clear before, that it is not on Georgian Dream’s agenda to remove President Mikheil Saakashvili from power through street protests like what happened to former president Eduard Shevardnadze in 2003.

Bidzina Ivanishvili today said that they already have a presence in 44 out of Georgia’s 69 districts and expect to have the regional apparatus in place by the end of March, when Georgia Dream will hold its first party congress.