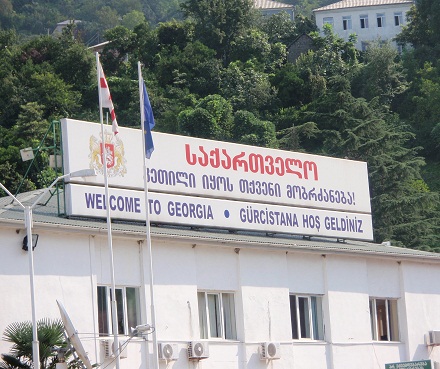 The border crossing between Turkey and Georgia at Sarpi. (Photo: Ephraim Stillberg.)

TBILISI, DFWatch – Nani has been working in Turkey for last ten years at a rich family, taking care of all the household activities. Her husband died years ago and she had to provide her two daughters with food and clothes. She couldn’t find a job here in Georgia and decided to leave for Turkey on advice from her friends.

Since going there she has changed family several times, but the salary is usually the same amount. She manages to send some money back to her daughters. Every three months, she went back to Georgia for at least a week and then back to Turkey.

Until February 1, there was no problem to go to Turkey. The rules said that she could stay for 90 days without a visa and return back for a few days, and then back and continue working.

Then the Turkish government adopted a new law which came into force on February 1, making all foreigners who arrive in Turkey under the 90-day visa-free rule to go back to their countries and stay there at least three months before coming to Turkey again.

The law is directed at avoiding illegal employment in Turkey, which is a common problem there. In October, 2011 200 people were deported back to their countries from Turkey; 150 of which were Georgians.

They used to arrive in Turkey, find a job within the three months and then some of them, instead of returning, just stayed there illegally.

However the law created problems for people who used to work there for years without any problems and without violating the law.

Salome, elder daughter of Nani graduated from the university last summer. She’s a journalist. But she couldn’t find a proper job with high enough salary to afford to travel back and forth between Gori and Tbilisi every day.

By summer she couldn’t leave her 14 year-old sister alone in Georgia to go with her mother and find a job in Turkey, because it was a school holiday and the boarding house of her school was closed.

Finally, in January, 2012, Salome left with her mother, who had come to Georgia for New Year holiday.

She was planning to work in Turkey for about a year to collect money for studying to get a Master’s degree.

“I left the university, because the fee to study there is impossible for me to pay. I passed the exams to continue higher education again in the field of journalism. So I refused studying and decided to collect money to pay,” she says.

However in January she learned about changes in the law and now both she and her mother are puzzled as to what to do.

“I cannot study at the moment, it’s too expensive and mom won’t be able to find a job in Georgia with a salary she had here to take care of us. We don’t know what we will do yet.

Lali’s family is also trying to think of a solution. She is 19. Second year at the university, but she also is unable to pay the fee of 2 500 lari. Her father doesn’t have a job, while her brother is serving in Afghanistan. Her mother used to sell clothes and accessories at the market, but she lost her job and also left for Turkey.

“Mother will have to come back in three months. I am thinking to go the next three months instead of her, so that the family doesn’t lose a worker. We could replace each other this way,” Lali tells us. But she says she hasn’t discussed her decision with her family yet.

“Who will hire a person for work if she will have to leave in three months and come back only after another three. It’s impossible. That’s the problem,” Salome says.

“The subject of discussion is that the changes in the Turkish law should maximally be in line with our bilateral visa-free regime,” Jalagania says.

Except Turkey, Georgian families, and usually women, are employed in Italy and Greece. They often work for wealthy families or taking care of elderly people, or teach English. Then they send money to their families in Georgia.