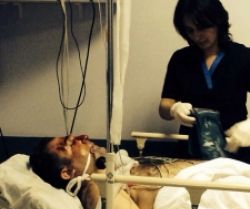 TBILISI, DFWatch–The brother of a wanted former official in the Saakashvili regime was brutally beaten in Tbilisi on Saturday.

The victim of the attack was Davit Kodua, brother of Erekle Kodua, a former top police official who is currently outside the country and internationally wanted.

Davit Kodua was attacked and beaten by masked men Saturday. After the attack, he was taken to hospital with multiple injuries.

Later the same day, police detained a suspect in the case and published a video of his confession – a common practice in Georgia.

Kodua was attacked at about 15:00 on Abashidze Street in Tbilisi, while in the company of a four-year-old child and a nanny.

Nanuka Zhorzholiani, a well-known TV-show anchor and wife of Erekle Kodua, posted photos on Facebook of a severely beaten Davit Kodua. She said Kodua was first hit by electric shock and felt unconscious and then he was beaten, receiving injuries to his face and head. The nanny and child were not harmed.

Zhorzholiani wrote that three person attacked Kodua, only two of which had masks, so the nanny should be able to recognize this one person.

The wife of the suspect who was detained by police for beating Kodua told journalists that in 2008 on orders of Erekle Kodua certain people broke into their house and placed 15 grams of heroin there. She said her husband was a businessman.

She claims Kodua wanted to have her husband’s shares in his own company, but he refused. That is why Kodua planned to detain him, and planted drugs at his house in order to have a reason to detain him.

“They made him pay 500,000 [lari] and forced him to give away 50 percent of shares registered on my name,” Interpressnews quotes her saying, adding that after all his husband was released.

After the change of government in 2012, they sued, and an investigation was launched.

“He then met Davit Kodua in the street and beat him. Is there anything surprising?” she asks denying information that the attackers were wearing masks.

According to Sutidze, her husband surrendered to police and he wasn’t wearing a mask during the incident.

Wife of Erekle Kodua, Nanuka Zhorzholiani, doubts that the suspect really beat Kodua, because he was a childhood friend of Davit Kodua and if he really was there, the nanny would have recognized him as he had been to their house many times.

In a confession published by the Interior Ministry, the suspect says he met Kodua in the street by chance. He said the events in 2008, his detention and deprivation of 50 percent of his shares, was the motive for him to beat Davit Kodua.

“My one year old child was witness to all of this, when they broke into my house and planted the drugs. I can never forgive either Erekle or Davit Kodua for this.”

Davit Kodua’s health condition is stable, according to doctors.

The suspect will most likely be presented in court on Monday or Tuesday.