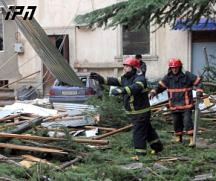 The wind also tore down a tree on Dadiani Street, which damaged electricity transmission lines, as a result of which households living on the street were left without electricity.

Interpressnews reports that three families, among which there are six children, are now homeless on Imereti Street.

“We called the emergency service, but firefighters arrived and they didn’t even had proper tools,” one of the locals, Gabriel Chaduneli says. He recalled that his son came in from the yard only a few minutes after the roof fell there.

He said the firefighters helped with cleaning up the place, and later a representative from the local municipality arrived and promised to help the families.

The wind toppled several trees in the capital, but no-one was injured.