Here are the roads you should avoid right now in Georgia

Here are the roads you should avoid right now in Georgia 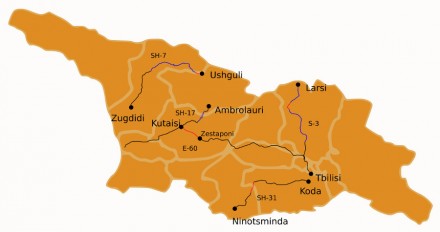 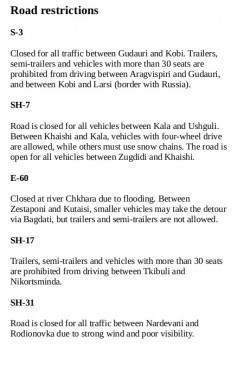 TBILISI, DFWatch–There are still several roads in Georgia that remain closed to all traffic due to the weather. We bring you the latest information from the Roads Department.

The road from Tbilisi to the winter resort Gudauri was reopened on Saturday as there is no longer a danger of avalanches.

However, there is still a risk of avalanches on the S-3 between Gudauri and Kobi, and the road is closed for all traffic in that section. At other sections of the S-3 there are restrictions on heavy transport (see list on right).

The intense rainfall is continuing in Svaneti in the north of Georgia, and the SH-7 road remains closed for all traffic between Kala and Ushguli. On other parts of the SH-7, there are restrictions.

The E-60, the main east-west highway through Georgia, remains closed at 206km because of flooding of the river Chkhara. Smaller vehicles may take a detour via Baghdati, but trailers and semi-trailers are not allowed here (see right).

On the SH-17, restrictions remain in place between Tkibuli and Nikortsminda, as for trailers, semi-trailers and vehicles with more than 30 seats are prohibited.

In the south of Georgia, the SH-31 is closed for all traffic between Nardevani and Rodionovka near Ninotsminda due to strong wind and poor visibility.