Speaker of Parliament is abusing his position

Speaker of Parliament is abusing his position 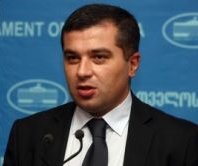 Speaker of Parliament Davit Bakradze is bringing with him employees of the parliament to do campaigning for the National Movement party. (IPN.)

TBILISI, DFWatch – Now that the date of Georgia’s parliamentary elections has been set to October 1, political parties are under certain restrictions set by law, that last until Election Day.

One restriction is that it is prohibited to use administrative resources for campaigning. But the Speaker of Parliament says that he will be a guarantee that the government will not violate the law during the election process. However, Davit Bakradze is the one violating the law. Experts consider Bakradze’s actions a violation of law. He brings employees of parliament to the regions during working hours in order to present majoritarian candidates for the National Movement party.

According to the Election Code of Georgia, a person who has a right to participate in election agitation, and who holds a position in central government or local government, is prohibited from using that official position in order to campaign in favor or against any election subject.

‘Using official position’ includes engaging other public employees in activity which will be to the benefit present or elected candidates.

Officials have a right to get involved in election agitation, but only after working hours. But Davit Bakradze brings with him parliament employees to do election campaigning during their working hours.

Last week, when the date of the election was set, the election process officially started. Davit Bakradze held several meetings of this type, where he presented National Movement candidates.

Nina Khatiskatsi, an independent expert working on election issues, says that engaging parliament employees in this process is in fact a violation of law.

She explains that in addition, there is a memorandum between political parties, NGOs and Central Election Commission, which defines what it means to fulfill official duties.

“We have defined this with a memorandum because the law doesn’t specify it. It is the following: if a person fulfills an official duty during working or non-working hours, it is prohibited for this person to participate in an election campaign.”

Khatiskatsi adds that if any of parliament employees join Bakradze in election campaigning during working hours, it means that the election code is violated.

The penalty for breaking the law is 2 000 lari fine for such a violation. This is nearly USD 1 200. In case of repeated violations, sanctions gets stricter, but no one has fined Speaker of Parliament or the National Movement for this violation.

The inter agency commission, which works on preventing such kinds of violations, does not make any comments on this issue, nor does it react.