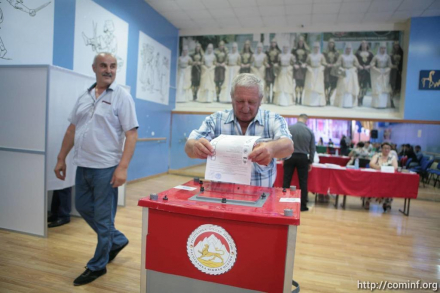 But United Ossetia’s margin of victory is well below the last election, in 2014, when it garnered almost 45 percent.

The opposition People’s Party, on the other hand, noted a surge in votes and secured 22 percent, well above its previous 9.5 percent, according to preliminary results from the de facto electoral body.

The same announcement placed Nykhaz at over 14 percent, Unity received 13 percent, and the local Communist party over 7 percent.

Georgia has denounced the elections.

“The above so-called elections represent yet another futile attempt by Russia and its occupation regime in Tskhinvali to legitimize the ethnic cleansing of Georgians in Tskhinvali region/South Ossetia, the illegal occupation and forceful change of the sovereign borders of Georgia,” reads a statement released by the Ministry of Foreign Affairs of Georgia on Sunday.

The Tskhinvali parliament is a unicameral legislature which consists of 34 representatives. In the current parliament, 20 seats are held by United Ossetia.