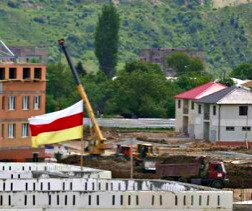 It was the parliament’s speaker who said this on Monday, as quoted by Itar-Tass.

“We do not renounce our slogans, there will be no two-pronged approach to this issue,” he said. “The question will be put to a referendum, but a fully formed, consolidated, working parliament must discuss this issue.”

The party United Ossetia, which recently received 46 percent of votes in an election, promised during the campaign to unite the region with Russia, as a first step toward the final goal of joining together with North Ossetia, which is an autonomous republic inside Russia.

The leader of United Ossetia is Valeri Bibilov, an ally of former president Kokoity. The election was held on June 8, 2013, but was not recognized by the international community, nor by Georgia.