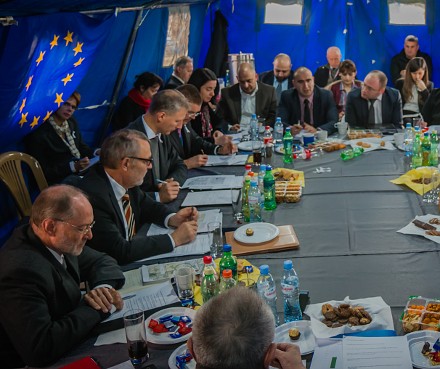 TBILISI, DFWatch–Representatives of Georgia and the breakaway region South Ossetia met on Thursday for a regular field meeting, ending it with a feast.

The meetings of the Incident Prevention and Response Mechanisms have been held regularly since the 2008 war, and this 60th one as usual took place in the village Ergneti.

Georgia condemned the recent detention of people living close to the demarcation line, underlining a particular incident on November 23, when Orthodox Christians were marking St George’s Day. Russian soldiers prevented people from entering a church and detained two of them, who were brought to a detention facility in Tskhinvali.

Interior Ministry representatives also brought up a violation of Georgian-controlled airspace by a Russian helicopter.

South Ossetia’s representative David Sanakoyev told the news agency RES that an OSCE observer has been holding meetings with relatives of missing South Ossetians, investigating their cases, which he hoped the observer’s report would shed some light on.

“Since the last meeting, there have been 21 cases of border violations”, Sanakoyev said.

This IPRM meeting continued in a tent with a 60th anniversary feast, where Ossetians brought pies and homemade beer, while Georgians offered traditional cuisine, Sputnik-Ossetia reported.

The next IPRM meeting will take place on 16th December.