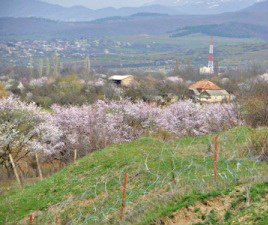 TBILISI, DFWatch–Russian border soldiers have again been seen in the village Ditsi, on Georgia controlled territory close to the de facto border with Russian-controlled South Ossetia.

On Monday, the first reports came about Russian soldiers in the villages Ditsi and Dvani moving the so-called administrative border 300 meters into Georgia-controlled territory.

Journalists for Interpressnews on Wednesday reported from Ditsi that Russian soldiers again were seen in the village and continued installing barbed wire fences in the same place where they started moving the border two days ago.

According to this information, there is 10-person group, some of whom appear to be holding maps.

But the de facto South Ossetian Foreign Affairs Ministry downplayed the importance of the activity, claiming that the actions of the Russian border soldiers do not concern the sovereignty of ‘the neighboring state’.

“The process of border fixation is in progress in accordance with South Ossetia’s legislation,” a statement issued by the de facto ministry reads. “There are no arbitrary actions of the Russian soldiers, while the Georgian government’s concern is nothing more than another provocation.”

The Georgian government has sent a note of protest to the Russian Federation, while government officials are staying in touch with the international community informing them about this issue.

The topic will be the major issue at Friday’s meeting of the Incident Prevention and Reaction Mechanism in the field somewhere near the conflict zone, and also at next round of the Geneva talks between the warring parties of 2008.