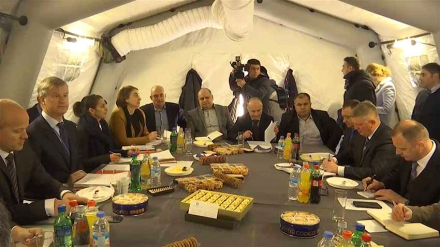 TBILISI, DFWatch–South Ossetia demands the withdrawal of the Georgian anti-occupation civic group from the vicinity of the conflict zone due to ‘security considerations’.

This demand, which was aired at the Incident Prevention and Response Mechanism (IPRM) meeting at the village of Ergneti on Tuesday was rejected by Georgian authorities.

“We have explained [to them] that the civic movement is on the territory of Georgia and the freedom of speech, expression and movement is guaranteed by the Constitution of Georgia. Hence, their demand lacks any grounds,” a representative of Georgia’s State Security Service (SUS) said after the talks with representatives of South Ossetia.

For the last few months, the group Strength in Unity (“ძალა ერთობაშია”) has had a permanent presence at the administrative borderline and held peaceful anti-occupation activities.

The head of the South Ossetian delegation, Yegor Kochiev, called the protest camp ‘provocative’, as quoted by RES news agency.

The group’s recent activities have been focused mostly around the village of Atotsi, where separatist authorities and Russian border guards in early November resumed installation of barbed wire fence along the administrative borderline between Georgia proper and the breakaway republic of South Ossetia.

Georgia expressed its opposition to the installation of border infrastructure which it views as flagrant aggression, while the separatist side argued that a clear demarcation is necessary for practical reasons for the people who live in the area.

Tuesday’s meeting was held first time after a three month boycott by Tskhinvali after Interpol issued arrest warrants for two Tskhinvali security officers, who are suspected of participating in the murder of former Georgian soldier Archil Tatunashvili.

This case, and the case of the murder of Basharuli, were the most important issues for the Georgian side at this latest meeting.

The next IPRM meeting is scheduled for February 8, 2019.