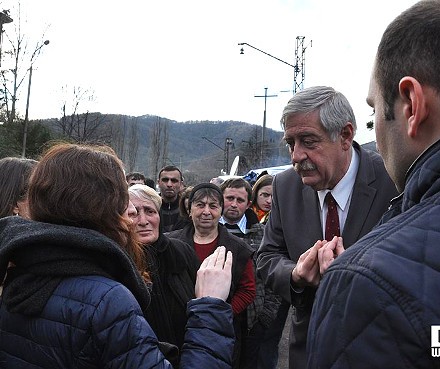 TBILISI, DFWatch–A solution was reached Monday evening in the labor dispute in Tkibuli after more than four hours of negotiations.

Mine workers in the western Georgian town went on strike more than two weeks ago, demanding a pay raise.

The negotiations included representatives of Georgian Trade Union, the MP for Tkibuli, the local municipality, the strike committee and the management of Saknakhshiri GIG, the company that owns the mines in Tkibuli.

Saknakhshiri GIG agreed to increase workers’ salaries by 7 percent immediately, and an additional 3 percent raise in the beginning of April. The company will also partly compensate for the days the workers were absent and register some of those days as vacation. Moreover, the company promised to revise labor conditions.

The human rights organization Education Monitoring Center, which is monitoring the strike in Tkibuli, says that only a small portion of the workers were present at the negotiations.

Business Ombudsman Giorgi Gakharia, who also attended the meeting, told journalists that according to the agreement, work in the coal mines must be restored no later than March 1.

Not more than 50 of the around 1,000 workers who are part of the strike are aware of the content of the agreement. It is unknown how the rest of the workers will react.

The workers’ demand was to increase salaries by 40 percent after Tkibuli was taken off a list of places designated as ‘mountain settlements’, which qualifies for tax advantages including a 10 percent income tax, instead of 20 percent.

Meanwhile, the MPs Gia Volsky, Gia Zhorzholiani and Mirian Tsiklauri introduced a draft bill to amend the tax code. Parliament is considering the bill in a fast-track procedure. The amendment will also apply to the workers in the Tkibuli coal mines. The draft will go through committee discussions starting Tuesday.

If the bill is passed, ‘mountain settlement’ advantages will be extended for a period for villages and towns which had such status as a new law came into force on January 1, 2016. This would include Tkibuli.