Georgian kvevri to be on display at UN in Geneva

Georgian kvevri to be on display at UN in Geneva 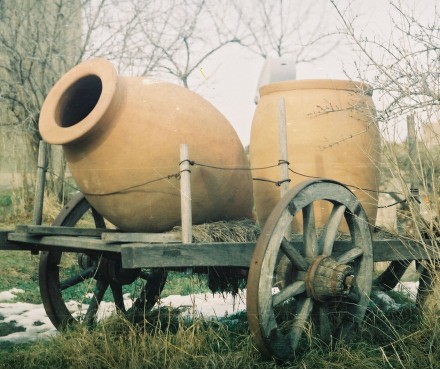 TBILISI, DFWatch–The United Nations will have traditional Georgian wine making vessel on display outside its building in Geneva from March 1 in connection with the organization’s 70th anniversary.

According to the Foreign Ministry, a life-size clay kvevri will be placed in the inner courtyard of the Geneva UN Office. It was made in the Georgian village of Makatubani and contains Georgian and English inscriptions – ‘Georgia – საქართველო.’

The building in Geneva is the UN’s second largest, after the New York office. More than 100,000 people visit every year, and the kvevri will be placed in an area which is included in the information tours for visitors, which means that it will be seen by many of the visitors, not only official delegations.

The kvevri will be presented at a ceremony on Tuesday in Geneva that will include wine-tasting and the screening of a documentary about Georgian wine-making.

Art critic Tamar Amashukeli told DF Watch that the exhibition at the UN in Geneva will contribute to popularize Georgian cultural heritage and the country in general.

It will also contribute to the Georgian wine business, and wine produced the traditional way in kvevris. She said it is important to have more Georgian objects recognized by UNESCO.

“There are currently only three Georgian objects on UNESCO’s intangible cultural heritage list, which are Mtskheta, the monuments in Kutaisi – Gelati and Bagrati – and Zemo Svaneti. Old Tbilisi may also be recognized by UNESCO. Georgian polyphony singing, wine technology of kvevri are on the UNESCO heritage list and right now documents are processed to include the Georgian alphabet,” Amashukeli explained.

Winemaking in kvevris started in Georgia thousands of years ago and the tradition is still kept alive in some regions of the country.

The method of making wine in kvevris was listed among intangible cultural heritage in 2013, recognizing that its unique.