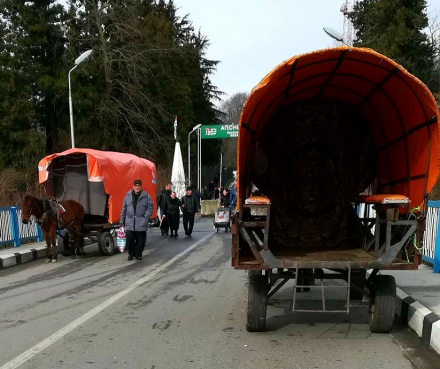 The Enguri Bridge crossing is essential to many local businesses, who rely on trade in products such as hazelnuts. (DFWatch.)

GALI, DFWatch–Sokhumi has brought in new restrictions on the administrative borderline between breakaway Abkhazia and Georgia proper, affecting many businesses in the area.

Crossing north-south across the Enguri Bridge is essential to many in the area, who rely on trade in products such as hazelnuts. But despite the new restrictions, anyone who pays money can cross the border by paying their way, locals told DFWatch.

“[The “border”] is closed for men aged between 18 and 60, however, the restriction does not actually apply. Anyone who wishes to cross the Enguri bridge pays 50 lari (USD 17) and pass it freely. You may not be able to pay every day, but if you need to cross, you have to pay,” a resident of one of Gali villages said to DFWatch.

Residents have suggested that the breakaway authorities are now only motivated by money, as another reason for restrictions on the “border” is illogical.

“If money is not a reason and they really care about safety, what is the point of paying for it and going away? The fact is, they’ve been accustomed to accepting bribes, and [the restrictions] will persist until their pockets are well-lined. Then they will think of a new method,” said another resident of the Gali district.

Sokhumi closed the passage on the Enguri bridge on July 27. Initially, the stated reason was a rally in Tbilisi against the occupation. Later, the “border” was opened to everyone except men aged between 18 and 60. The restriction is officially still in force in this form.