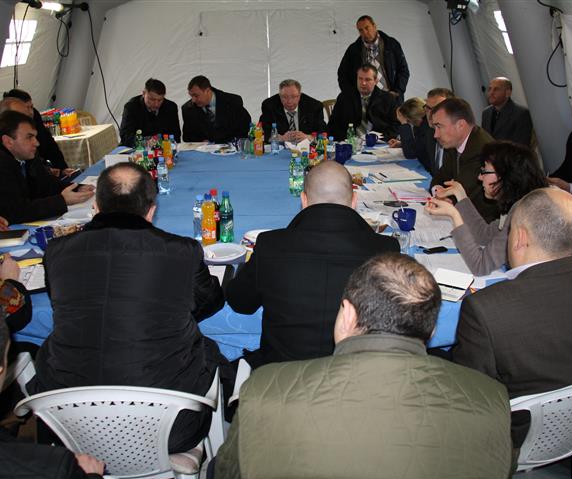 Problems created by new border fences was brought up again at the regular field meeting between the parties in the 2008 war. (EUMM.)

TBILISI, DFWatch–The parties in the 2008 war met again on Friday for a field meeting in a tent in Ergneti, a village on the border with South Ossetia.

These field meetings are formally called Incident Prevention and Response Mechanism (IPRM) and hosted by the EU’s observer corps in Georgia, EUMM.

Friday’s meeting was about the impact on the local population of the recent installation of barbed wire along the de facto border.

Georgia’s Interior Ministry said it expressed concern and protested the violation of Georgian airspace by Russian helicopters on March 6 and 15.

Parties also spoke about the situation in the villages Atotsi and Ghogheti, where fences were recently installed.

The meeting was co-facilitated by Toivo Klaar, the Head of the EU Monitoring Mission in Georgia (EUMM), and Ambassador Angelo Gnaedinger, the OSCE Special Representative for the Southern Caucasus.

This was the 43rd IPRM meeting. Next meeting will be held on April 28.