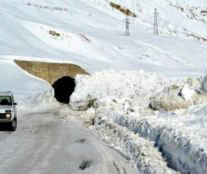 Two Latvian tourists are stranded in the Jvari pass due to the snow. (Interpressnews.)

A rescue operation is underway in Jvari pass north of Tbilisi after two Latvian tourists called the emergency number 112.

The road to Mestia in the Svaneti region has been blocked by snow. Electricity transmission poles are damaged. People in the village Ushguli have no electricity.

Also in Kazbegi municipality there are problems. Food supplies will run out in two days. Snowfall the last three days has blocked the roads Gudauri-Kobi and Stepantsminda-Larsi, the latter of which connects Georgia to Russia.

According to the latest information from Georgia’s Road Department, trailers are not allowed to drive through the Rikoti Pass, which connects western and eastern Georgia.

Traffic is still blocked along the Akhaltsikhe-Ninotsminda road, which goes to Armenia.

A man of around 50 years froze to death in Ninotsminda. According to Interior Ministry, he left home under the influence of alcohol. His family called the emergency service, and he was found dead after a few hours.

Emergency workers have rescued about two hundred Armenian citizens who have been stranded at the border crossing at Ninotsminda for the last few days due to the blocked road.

A storm on the Black Sea is causing problems for the port in Poti.