Six detained in Tbilisi at rally against National Movement

Six detained in Tbilisi at rally against National Movement 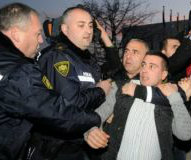 Demonstrators blame the National Movement for encouraging Georgian youth to join the war in Ukraine. (Interpressnews.)

TBILISI, DFWatch–Six people were detained for petty hooliganism in Tbilisi on Tuesday, during a rally outside the office of the National Movement.

The rally was organized by the youth movement Free Generation, which demands to convict former officials and ‘restore justice.’

The detainees are Giorgi Mukhigulashvili, Giorgi Kvirtava, Beka Shengelia, Lado Sadgobelashvili, Giorgi Bigvava. They were detained after throwing balloons filled with red paint. One of them, Bigvava, was detained for insulting a policeman.

The detainees were later released. Their court hearing will be held on Wednesday.

The Free Generation activists appeared outside the National Movement office at 18:00 and brought with them a list of children of party members who are studying at universities abroad.

They condemn the National Movement, or ‘Nationals’ as they are called, for urging young people to volunteer for the war in Ukraine and ask them instead to let their own children join the army and do military service and go to Ukraine to fight.

At the end of the rally, protesters attached posters outside the office with notes saying: ‘No to National-terrorism’ and ‘convict the National-regime.’

Free Generation regularly holds rallies at the former ruling party’s offices in the capital and other places in Georgia, demanding to punish them. Their rallies usually end with a scuffle and detentions for minor administrative violations.

The government coalition, Georgian Dream, promised in the 2012 election campaign to ‘restore justice’, but its supporters have recently grown impatient and demonstrated to demand that violators are punished and victims of the former regime compensated. Over a thousand people demonstrated in central Tbilisi last Saturday demanding that.