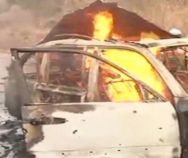 A burnt-out car after the attack on de facto leader Alexander Ankvab in February; the sixth assassination attempt he has survived.

TBILISI, DFWatch – The de facto authorities in Abkhazia yesterday detained six suspects in the case about the assassination attempt on the president in February.

On February 22, Alexander Ankvab’s car was fired on with machine guns and a rocket-propelled grenade. His guards fired back and managed to get the president’s car away from the situation. Two members of the guard, Remzik Tsugba and Tengiz Pandaria died, and several were seriously injured.

As a result of searches of the places they live, authorities found those who now are detained and seized a large quantity of firearms: rifles, pistols, hand grenade “Aglen”, night vision goggles, two grenade launchers, a large quantity of ammunition for small arms, as well as drugs, Abkhazian news agency Apsnypress reports.

The attack in February was the sixth attack on the de facto president.

On February 28, 2005 there was opened fire against his motorcade along the Sukhumi – Gudauta road as Ankvab returned to work;

On April, 2005 the same thing happened on the same road.

On June 20, 2007 he was the target of a land mine hidden in the road and controlled remotely.

On July 9, 2007 his jeep was fired on with a grenade launcher, which resulted in Ankvab receiving a mild concussion and several shrapnel wounds in the back.

On the night of 22 to 23 September 2010, a house Ankvab was staying at near Gudauta was hit by a grenade in the middle of the night, and he was slightly wounded.

More details about the detainees were not disclosed, for reasons to do with the investigation, Ria Novosti reports.