Six arrested for the mass unrest in Marneuli on election day

Six arrested for the mass unrest in Marneuli on election day 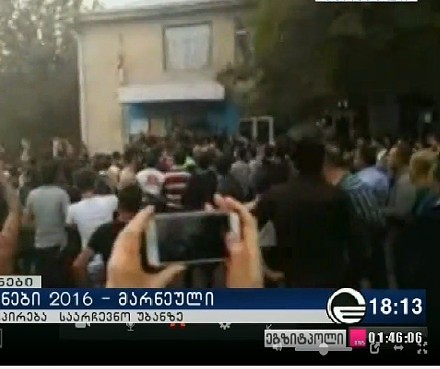 TBILISI, DFWatch–Police in Georgia arrested six people on Thursday who are accused of attacking an election precinct in Marneuli in the south of Georgia on election day October 8.

The six are arrested for interrupting the work of the local election commission at the 48th precinct in the village Kizilajo and for resisting the police. All of the arrested are under 24.

The Ministry of Internal Affairs (MIA) wrote in a statement that the six were particularly aggressive in the tumultuous events. They were calling for the citizens to break into the precinct and steal the ballot box, and they threw stones at the police.

“As a result of the conflict, several law enforcers, including the deputy police chief of Kvemo Kartli. The attackers weren’t able to steal the ballot box,” the statement reads.

The investigation continues in order to identify other people who participated in the attack.

The attack took place about an hour and a half before the end of voting. Riot police was mobilized in Marneuli along with ordinary police.

Two were arrested for the attack which happened in Zugididi, in the northwest of Georgia, also on Election Day, at two precincts. The election result was annulled at these precincts because the ballot boxes were damaged and documentation was destroyed.