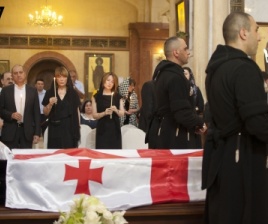 The body of former President Eduard Shevardnadze was placed in Sameba Cathedral in Tbilisi on Friday. (Interpressnews.)

A prayer was conducted at 13:00. The public funeral will be on Friday and Saturday at Sameba.

Sunday, July 13, there will be a funeral ceremony. For this, he will be brought back to his residence.

Eduard Shevardnadze will be buried at Krtsanisi residence in Tbilisi, next to his wife Nanuli Shevardnadze.

Top level visitors from around the world are expected to come for the funeral ceremony, including the speakers of parliament of Azerbaijan and Armenia, the minister of justice of Austria, the deputy foreign minister of Japan, a former US secretary of state and others.

Family and relatives and ordinary people are gathered at Sameba today.