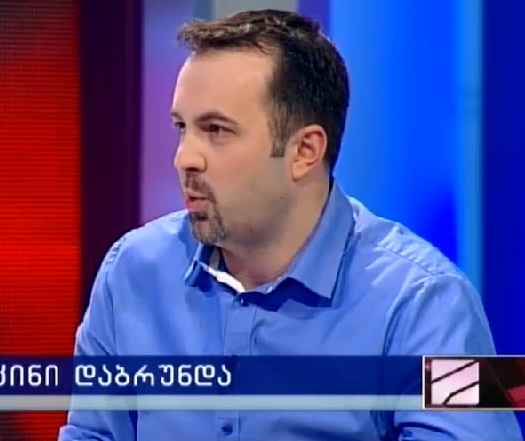 Defense Minister adviser Vako Avaliani said Friday that an investigation into the corrupt dealings has revealed that money was embezzled in the period when Shashkin was defense minister.

He served in the post only a few months, and left the country after President Saakashvili’s party was defeated in the parliamentary election. He explained that his views and positions are completely different from the new government’s, but recently came back to Georgia and said he was ready to answer to questions.

Avaliani said that one month before the parliamentary election, petrol belonging to the army was spent on the National Movement’s election campaign. He said that the investigation only began one month ago and only one episode of crime was revealed.

He described details of this episode, when the ministry suffered a 55 000 lari loss army petrol that was used for the UNM’s campaign. 22 000 liters of petrol and 16 000 liters of diesel was used.

There are still no charges against Shashkin or other persons involved in the case, but they may be questioned as witnesses.

Dimitry Shashkin, who also used to be education minister and prison minister, characterized it as ridiculous that he should have ‘stolen’ petrol.

“24 hours after my arrival, it turns out that my major crime was stealing petrol and embezzling petrol,” he said on the talk show ‘Pozitsia’ on Rustavi 2.

He said while in government, the National Movement’s major mistake was that they didn’t answer all questions.

“Now I am an ordinary citizen and there is a presumption of innocence – I shouldn’t prove that I’m innocent and not petrol stealer, but they should prove that I committed a crime,” he said, adding that accusing him of stealing petrol is like accusing him of killing Kennedy.

He said that while he was defense minister for three months, he discovered a budget deficit.

“I asked a question to Bacho [Bacho Akhalaia, who was defense minister before him] and I received absolutely logic and justified answer from him that this deficit wasn’t a result of someone taking money home, but it was a result of liabilities and contracts,” he said.

If the financing for the ministry would have increased, he added, liabilities would have been fulfilled, but if the National Movement didn’t win the election, the budget would not increase and the contracts would not be fulfilled.

He also explained that the liabilities were to do with specifying arms and other issues which he cannot speak of, but they would only be fulfilled if the UNM won the election.

Chief Prosecutor Archil Kbilashvili said the day after that the investigation is still in progress and that the Prosecutor’s Office has also started an audit of the Defense Ministry.

He claims that several million lari went missing in 2005-2012, but he is not able to specify the exact amount yet.