Sharp exchanges as government lays out its plans to parliament

Sharp exchanges as government lays out its plans to parliament 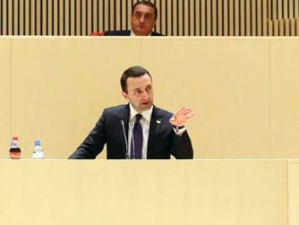 TBILISI, DFWatch–Parliament plans to confirm the new government on Wednesday. On Tuesday, parliamentary committees listened to speeches by the minister candidates and asked them questions.

A sharp exchange developed between Prime Minister candidate Irakli Gharibashvili and members of the National Movement, who tried to humiliate and laugh at him, but Gharibashvili tried to respond correctly or give ironic answers.

Alexandre Chikaidze, who will replace Irakli Gharibashvili as interior minister, was also questioned by MPs from the UNM, but he left those questions almost unanswered.

Chikaidze is not well-known figure in Georgian politics; at the time of his appointment, people knew close to nothing about him. He worked at the Interior Ministry from 2008. In 2011, he was promoted to head of the police department in one of the districts of Tbilisi. He remained at the ministry even after the change of government. UNM members claim he is a relative of Gharibashvili and that that’s why he was offered the minister’s post.

Chikaidze prepared a statement at the meeting with the parliamentary committee to describe his priorities. He repeated a few times that he will use all means in order to ‘honorably continue reforms of the Interior Ministry started by Irakli Gharibashvili’ and added that nowadays the ministry is free from political pressure and is depoliticized. He promised that when he is minister, the ministry will remain transparent and responsible to people.

Pavle Kublashvili, MP from the UNM, asked him whether he ever gave illegal orders during his work at the ministry or ever fulfilled illegal orders. Another MP asked him where he was present during the dispersal of a large anti-government rally on May 26, 2011 – a case for which former Interior Minister Vano Merabishvili is charged.

Chikaidze responded shortly, saying that he feels comfortable when ‘the Interior Ministry is depoliticized.’ He didn’t answer the rest of the questions despite having enough time to answer them.

Vakhtang Khmaladze, MP from Georgian Dream who chaired the session, reminded him that he had time to answer and added that ‘not giving answers is also an answer.’

Chiora Taktakishvili, MP from the UNM, compared the future Interior Minister to a bad pupil who cannot answer any question.

Kublashvili remarked that Chikaidze might be a good policeman but the parliamentary majority must think about how correct it is to propose him for political office.

The Gharibashvili government’s economic program will be based on the principles and values of free market economy.

The new program promises to overcome unemployment and poverty. The new government plans to develop small and medium-sized businesses and agriculture. The government also plans to study the extent of ‘elite corruption’ in recent years and find ways to root it out.

Gharibashvili said the government’s policy will be based on the interests of the Georgian people.

“Engagement of the citizens will be the major grounds for government plans and realization,” he added.