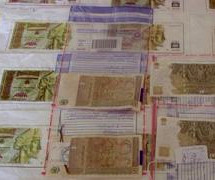 TBILISI, DFWatch–Police in Georgia detained seven people on Thursday for manufacturing and distributing a large amount of counterfeit money.

The Ministry of Internal Affairs announced that a group of criminals were in possession of special equipment for producing 20, 50 and 100 counterfeit lari bills which were distributed to several vending places all over Georgia.

Investigators are now working to find out what amount of counterfeit money was spent in total.

If convicted, the group may be sentenced to from 7 to 19 years in jail.