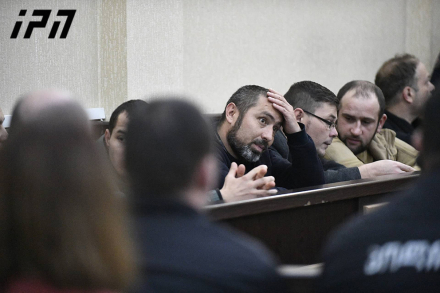 The seven pleaded not guilty during the hearing in Tbilisi City Court. (IPN.)

TBILISI, DFWatch–Seven jailed members of the Donbass Battalion have gone on hunger strike in Tbilisi, protesting their detention and claiming that the police planted illegal items.

The six Ukrainian and one Georgian citizen are charged with illegal possession of firearms and ammunition and were placed in pre-trial detention by Tbilisi City Court on Tuesday.

During the court hearing, the detainees pleaded not guilty and claimed that Georgian authorities are using their arrest as part of its political agenda, as evidence that the opposition is planning to violently overthrow the government.

The seven are linked to Ukraine’s volunteer battalion ‘Donbass’, which has played a key role in the war against pro-Russian militia in the Donetsk and Luhansk regions.

The Donbass Battalion’s founder and commander, Semen Semenchenko, is a member of the Ukraine’s parliament, Verkhovna Rada, and is strongly opposed to the incumbent president and government. Reportedly he escaped arrest only because of his diplomatic passport, which grants him immunity.

He acknowledged that he met Georgia’s ex-president Mikheil Saakashvili in November, however flatly rejected that the meeting had something to do with his trip to Georgia.