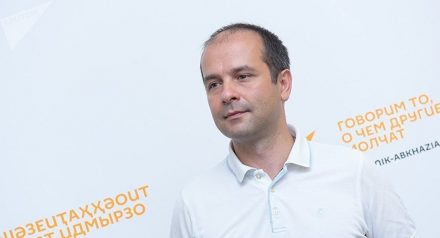 TBILISI, DFWatch–Several Latin American countries that considered recognizing Abkhazia as an independent country refrained from doing so after the personal intervention by US and UK leaders, a former Sokhumi politician has claimed in an interview with Russian news agency RIA Novosti.

Maxim Gvinjia, de facto minister of foreign affairs of breakaway Abkhazia in 2006-2011, said he toured almost all countries in Latin America negotiating with them about the recognition of Abkhazia’s independence.

During the tour, he almost struck an agreement with a prime minister of an unidentified state, but the overtures eventually failed due to intervention by the United States.

“I was just coming out only from [PM] palace and stumbled upon the US ambassador who was going in screaming and yelling. I came the next day already knowing what had happened. ‘We’re sorry,’ they said, ‘the ambassador came around, and Hillary Clinton called [by phone] screamed, calling bad words,’” Gvinjia said, adding Washington threatened the country with suspending all American programs there.

“Hillary [Clinton] personally called the president of another country, scolded him, screamed into the phone. Then [Americans] organized an unexpected economic conference in New York, they sent a plane for the president. I do not know what was done with him, but after that he even was afraid to respond to my emails,” Gvinjia said.

He also accused France in the same vein.
“The French ambassador called by phone to Vanuatu, saying: ‘How can you be friends with Abkhazia, which committed genocide against Georgians? The Georgians are our brothers, they are future members of NATO. You are spoiling the whole picture…” Gvinjia said.

Despite much efforts, mostly by the Russian foreign ministry and personally by Sergey Lavrov, only four states, except Russia itself, recognized Abkhazia’s independence. The list includes such countries as Syria, Venezuela, Nicaragua and Nauru.

Abkhazia declared independence soon after the bloody war of 1992-1993, which it won with the military support of Russia. All but one of its districts were cleansed of ethnic Georgians which accounted for about 45 percent of its pre-war population. The process was accompanied by war crimes against civilians such as mass executions, torture and gang rape. According to Sokhumi’s figures, only 46,000 ethnic Georgians were living in Abkhazia in 2011, while in 1989 there were 240,000.

Only in Gali, Abkhazia’s southernmost district, Georgians allowed to remain yet in dire conditions, stripped of many civic rights.