Seeds of prosperity between Georgia and Armenia?

Seeds of prosperity between Georgia and Armenia? 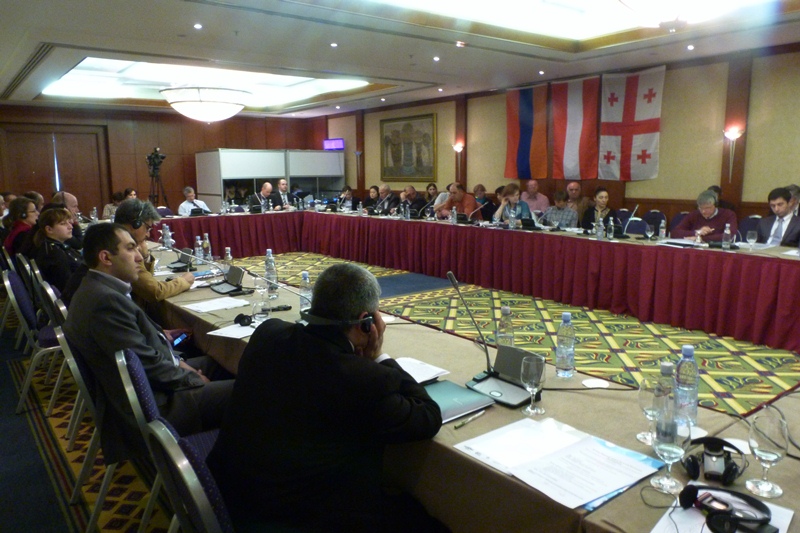 Half of Georgia's population is involed in agriculture, but mostly as subsistence farmers and the sector only accounts for 9% of GDP. How to make it into more of a business was discussed in Tbilisi Thursday. (Photo: Mari Nikuradze.)

TBILISI, DFWatch – How can Armenia and Georgia create more growth – literally – in their border region? Agriculture was the topic of a conference Thursday at Courtyard Marriott Hotel in Tbilisi.

The goal was to exchange information on local planning and agricultural development in the borders of regions of the two countries. The guests were mostly from state bodies in both countries and from the private sector.

On entering the lobby, visitors were treated to an exhibition of Armenian and Georgian agricultural products, meant to demonstrate the investment and development going on in both countries, but also for producers to do some testing.

Armenia suggested a newly implemented project in its country for farmers and agricultural professions. Presenting photos of newly built buildings for trainings for farmers, veterinary centers Sevak Manukyan, Deputy Director of CARD, an organization in Armenia, described the first such project implemented in his country.

“I hope we will continue further cooperation about how to implement the same project in Georgia, to share ideas and advice, consulting with each other,” he said.

Gigla Mikautadze, Deputy Head of Agriculture Development Department at the Georgian Ministry of Agriculture also talked about one of their successful projects and described future plans.

The project, which is financed by the Austrian Development Cooperation, envisages the involvement of the population in the bordering regions to try to map out what the current situation is, people’s problems and needs.

The project runs for three years and is directed at creating a suitable environment for the poor population’s social and economic development.

Within the frames of the project working groups will be set up in different districts, which will prepare a future project of what’s important and problematic in these places.

One of the main goals of the project is to inform farmers and people working with the agricultural field, as they are less informed about the new technologies, prices, and modern international facilities.

According to annual report Georgian Economic Outlook, published by the Economic Policy Research Center (EPRC), the agricultural sector in Georgia only is responsible for 9% of GDP, which according to the authors, is a very low indicator, considering that half of Georgia’s population is employed within this sector.

Nino Evgenidze from EPRC says that most of the self-employed people are employed in the agricultural sector and nearly 17 per cent of these people receive less than one dollar a day on average.

“This indicates that the agricultural sector doesn’t play any important role in the GDP growth, and these people who are considered as if they were self-employed, in fact are on self-subsistence, somehow satisfying their ordinary requirements every day.”

One of the main reasons for this situation is the structural unemployment in the country. According to a Caucasus Resource Research Centers survey conducted in 2011, 64 per cent of those questioned say they don’t have a job, in sharp contrast to figures from GeoStat, Georgia’s national statistics department, saying that the level of unemployment in Georgia was 16.3 per cent last year.

Another problem is that the investors are less interested in the agricultural sector. The largest investors in the country are Netherlands, Denmark and Turkey. Mining and manufacturing sectors are the most popular for direct foreign investments, while agriculture, forestry and fishing are the least popular.

Gigla Mikautadze from the Agricultural Ministry yesterday said that the government has named the agricultural sector as its main priority this year. He says they are working on stimulating the export of local products and that some success has been achieved within wine production. Georgia has negotiations to protect export brands. https://dfwatch.net/russian-company-patented-georgian-wines-in-germany-45965

Among the latest projects, he named the government’s plans to introduce new citrus varieties, as the Georgian species are getting older and need renovation, that’s why the export of citrus has been reduced lately.

Six new fruit and eight new vegetable demonstration yards will be presented to farmers to teach and present new technologies and ways to care for own farms and yards.

CARE International’s organized the conference as part of the project Local Actors Join for Inclusive Economic Development and Governance in South Caucasus.