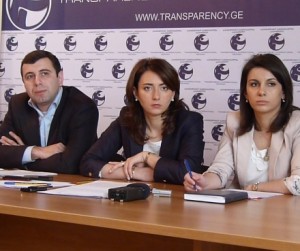 Georgian Young Lawyers Association (GYLA), Transparency International Georgia and Institute for Development of Freedom of Information prepared recommendations to amend the law on information security, which they think violates both the constitution and the administrative code.

But the bill, which was adopted by parliament on the first hearing, defines new categories of secret information, like confidential, restricted, and non-classified.

“Access to public information is very important in regards to accountability, transparency, fight against corruption and other areas,” Tamar Chugoshvili, head of GYLA says.

It is not easy to understand what kind of information can be contained under the new categories introduced in the new bill. The law widens the constitutionally defined concept of restricted information; it doesn’t aid in creating transparency, but on the contrary makes information even more closed.

The explanatory note of the bill says that the goal is to provide cyber security.

“But in reality, the law applies to public information, and subjects of this law will decide which information to make public and which secret,” Levan Avalishvili, head of IDFI says.

They are not obliged to explain why they decide not to provide the information.

Levan Avalishvili says there is a law about secrecy in Georgia, which describes the procedure for declaring some information secret.

“By this law, we are able to know who grants this status and all the procedures of making information secret. The new law doesn’t require such information,” he says.

One of the lawmakers’ arguments is that they don’t know which kind of information certain bodies will need to keep secret.

Talking about cyber security, the three organizations agree that there is a need for regulation within that area, but this shouldn’t apply to public information.

In August 2008, during the Russo-Georgian war, a parallel information war took place through forums, social networks, official websites and other sources between the two parties, which can be considered a serious reason to regulate cyber security.

The authors of the bill are majority MPs Kakhaber Anjaparidze and Zviad Kukava. Organizations sent parliament and committees recommendations explaining in detail all problems which can appear after enforcing the law.