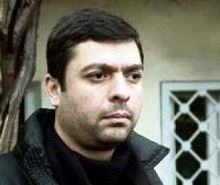 Director of Maestro TV, Ilia Kikabidze, says satellite receivers were distributed in order to increase the number of viewers, not to support any political party. "I don't represent a political organization," he said. (IPN.)

The Prosecetor’s Office suspects that Maestro is distributing satellite receivers to voters for political reasons.

The director of Maestro says it’s ordinary commercial activity and has nothing to do with politics.

Another TV station, Channel 9, recently was subject of similar action, as thousands of satellite disheses were seized in a nationwide police raid.

The case against Channel 9 is not yet finished. The Prosecutor’s Office today released information that satellites belonging to Maestro TV may also be seized.

The statement says that an investigation was launched on June 20, 2012, based on information about the transfer of satellite receivers to voters for free. The investigation observed that Elita Burji Ltd, which is ‘related to’ the opposition coalition Georgian Dream, ordered Maestro to bring a large amount of satellites into Georgia.

The Prosecutor’s Office took the case to Tbilisi City Court Wednesday and received the court’s approval for the seziure.

The statement says that the investigation has produced evidence that these satellite receivers ‘will be used to to distribute them to the population for free, with the same scheme as was used in the case of Global Contact Consulting.’

Global Contact Consulting is a company which owned satellite receivers that were used by Channel 9. These receivers were seized in June, on the prosecutor’s decision.

Maestro director Ilia Kikabidze on Wednesday said satellite receivers belonging to Maestro have already been seized. For the last few days, the company has had problems with customs.

Kikabidze considers the prosecutor’s arguments wrong under the law and says his company will appeal the court ruling.

“We have made large investments to develop the channel. This was one of our measures which is directly related to increasing the number of viewers. So, this is not voters’ bribery, it’s not imaginable for me as I don’t represent a political organization. I do not install dishes, haven’t distributed and no one knows in what terms we are going to do this. This is ordinary commercial activity, and there is no talk about giving things for free to anyone,” he said in a live broadcast on Maestro TV soon after the City Court made its decision.

Mamuka Glonti, co-founder of Maestro, considers this the next round of fight against the media and the closer elections get, this fight will get tougher.