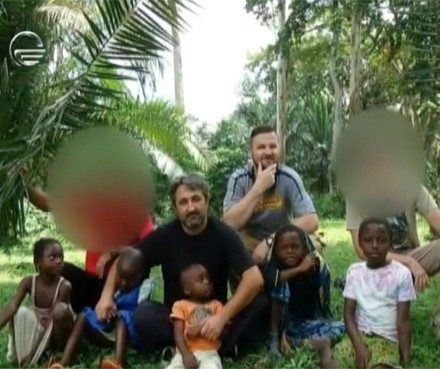 Pilot Vyacheslav Pluzhnikov is being held by a Tutsi rebel group in the Democratic Republic of the Congo after a helicopter crash. (Imedi.)

TBILISI, DFWatch–The second of two Georgian pilots who were taken prisoner by rebels in the Democratic Republic of the Congo has been identified as Vyacheslav Pluzhnikov.

Pluzhnikov has a background from the Georgian air force. He was arrested for alleged espionage for Russia in 2010  and released three years later in a mass amnesty.

The captured pilot’s identity was first reported by Imedi TV.

Pluzhnikov was injured when the military helicopter he was in crash landed in the east of the country nearly a month ago. He has recovered and is feeling well, Imedi reports.

The two Georgian helicopter crew members are there on private contracts and they were captured by  rebels who are waging a guerrilla war against the central government.

The other Georgian pilot is Soso Osurauli, also a former officer of the Georgian air force.

Pluzhnikov was arrested in 2010 in a case known as the Enver Affair, after an alleged Russian intelligence agent code named ‘Enver’. 15 people were arrested in the swoop, mainly air force officers.

Pluzhnikov was among those who insisted on his innocence and he was sentenced for 13 years and 6 months.

After the change of power in 2012, his case, which had previously caused much controversy, was reviewed.

The following year, he was released in a mass amnesty following a prisoner abuse scandal.