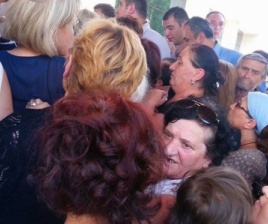 TBILISI, DFWatch–There was a quarrel outside Tbilisi City Hall on Monday between people who wanted to meet the mayor and tell him about their problems.

Newly elected Mayor Davit Narmania decided to set aside one day to meet with citizens. Hundreds of people turned up outside his office on Monday.

The reason for the scuffle was that some people were trying to get inside without following the line. Some confronted the guard at City Hall, requesting to let them inside, but the guard was trying to explain that it wasn’t possible to let so many people inside.

Some of the people felt bad standing in line on a hot day and required assistance from the emergency service.

Narmania said that during the day, he and his deputies met with about 700 people and listened to their problems, most of which were social problems.

He said he is ready to meet with citizens every Monday from 14:00 – 18:00. After yesterday’s incidents City Hall now asks people to register in advance to meet with the mayor or his deputies.