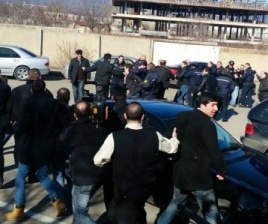 TBILISI, DFWatch–A scuffle developed Saturday as supporters of the ruling Georgian Dream coalition demonstrated outside the National Movement’s party office in Rustavi, a city 20 km south of the capital.

Mamuka Chikovani, the UNM candidate for Rustavi mayor, planned to hold a briefing about construction projects that have been suspended in the city, when activists from Georgian Dream’s youth wing arrived and started shouting: “Killers, brooms!”

Brooms became a symbol for the massive rallies that followed revelations of prison abuse in September 2012, two weeks before the parliamentary election.

The situation was defused after police arrived at the scene. No-one was detained. The meeting continued after representatives of Georgian Dream had left.

The Central Election Commission (CEC) afterward called on everybody participating in the election to avoid interfering with the election campaign and to not harm the election environment, so that there may be an election in free, competitive conditions.

“It is an important priority for our state to conduct the local election of 2014 in accordance with high international standards,” CEC’s statement reads.