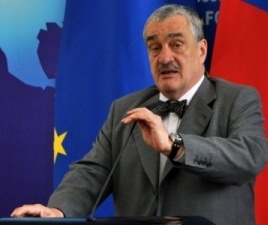 Czech foreign minister Karel Schwarzenberg says his country can not mediate between Georgia and Russia. (Interpressnews.)

The minister, who is visiting Georgia, said this at a joint press conference with his Georgian colleague Maia Panjikidze.

During the press conference, Schwarzenberg also advised Georgia to maintain contact with its two breakaway regions Abkhazia and South Ossetia. He said he thinks Georgia should have a ‘normal relationship’ on a personal level, such as maintaining business relations and other connections.

The Czech foreign minister said that Georgia needs to be patient and tolerant, but shouldn’t give up.

Schwarzenberg remarked that sometimes years and decades are needed for ‘the window of possibilities to be opened.’

The two foreign ministers paid tribute to the 20 year anniversary of establishing diplomatic relations between their countries. They discussed ongoing political processes, bilateral and multilateral cooperation issues and future perspectives.

During his visit, the Czech minister will also meet with the Georgian prime minister, defense minister, minister for Euro-Atlantic integration, and public defender.