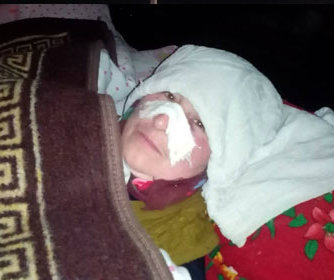 TBILISI, DFWatch–Politicians Thursday began making sense of the conflict in Mokhe the day before, while local Muslims spent the whole night at the police station where people are being held who were detained.

The scuffle began as Muslims tried to stop the dismantling of a building which has been used as a mosque in the past.

Thursday morning, Muslim children didn’t show up for school, also as part of the protest. According to Channel 9, a media outlet from south Georgia, 185 pupils from six villages didn’t go to school.

“We didn’t let the children into the school as a matter of insurance to protect them. We think they might be in danger. We will do so unless situation is peaceful,” Nodar Dimitradze, from Mokhe told Channel 9, adding that Muslims are now waiting to see when the detainees from yesterday’s events will be released.

Education Minister Tamar Sanikidze told journalists that schools are closed in three villages nearby Mokhe. She said teachers still show up at school waiting for the children. The minister said she hopes the problem will be solved soon and that the children won’t suffer because of what is happening.

Minister for Reconciliation and Civic Equality Paata Zakareishvili said on Thursday that it is OK for him if there is a culture house in this disputed building. But he added that first, the building’s past must be clearly determined.

He condemned violence and said any issue can be solved peacefully through negotiations.

“It is acceptable for me what the governor said that this building will become a library, a place for cultural education, but [to determine] what was there in the past this will require a thorough study, because the Christian population say one thing, the Muslims another.”

Prime Minister Irakli Garibashvili condemned Wednesday’s events in a statement the same day. He said he was informed that the building in Mokhe has a long past. The Orthodox population claims it used to be a church, but was destroyed, and from the ruins there was constructed a mosque, but for about century it was a culture house in Soviet times and later it became useless building, Garibashvili explained.

Then local government announced a tender for creating a library in the building, and it would serve the whole population, Muslims and Christians alike, in order to avoid conflict.

He confirmed that he was asked by local Muslims whether the building could be transferred to them, but he thinks this kind of issue should be solved by the state agency on religious issues. He expressed hope that the problem will be solved soon.

The state agency on religious issues on Wednesday expressed concern about the events in Mokhe.

“The position of the state agency on religious issues is that the rights of every religious community must be equally protected in the country and everyone’s interest must be taken into account,” the agency wrote in a statement.

In order to solve the issue it is necessary to achieve consensus and listen to all parties, the statement further says.

What caused concern among many was a photo published by Samkhretis Karibche which shows an old woman with facial injuries, who claims that she was injured during clashes with the police.

Shura Mikeladze, 59, recalls that a policeman hit her and she fell unconscious. She went there to protect the old mosque, and she doesn’t remember how she was brought back from Mokhe.

Tamar Kordzaia, a member of parliament from the Georgian Dream coalition, said on Thursday that the Prosecutor’s Office should study Wednesday’s events. She was astonished to see a photo of an old woman with facial injuries, especially when she says the injuries were inflicted by the police.

“It is impossible that this aged person was resisting a policeman. So I think studying this issue goes beyond the Interior Ministry, and the Prosecutor’s Office should study it as exceeding powers.”