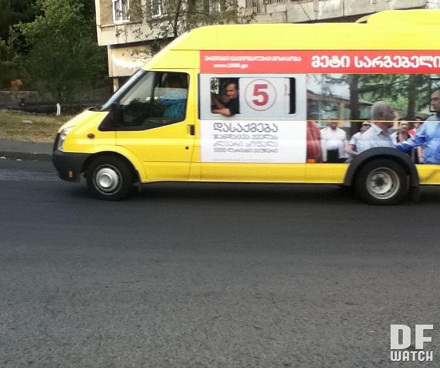 The campaign slogan of Saakashvili's National Movement party this year is "More benefits to people". (DFWatch.)

TBILISI, DFWatch – In most cities in Georgia, almost all billboards, minibuses and buses are covered by commercials for the National Movement party.

Other parties lack the money for such commercials, besides, the ruling party has already booked all available ad spaces.

The press office of the opposition Georgian Dream party says that the company Outdoor.ge, which has the rights to outdoors advertisement in Tbilisi, gave the coalition the right to place commercials, but not everywhere. Another problems is that Georgian Dream doesn’t have the money to place ads.

“It doesn’t matter whether they will give us right to place ads or not, as none of the parties of our bloc has money for that, as all our accounts are frozen,” says Nona Kandiashvili, the woman in charge of Georgian Dream’s press office.

The bank accounts of New Rightists Party haven’t been seized though, but Manana Nachkhebia, representative of the party says they cannot place such commercials because of a shortage of money.

But the other problem is that if they had money, they still they wouldn’t place commercials, as the government has already located commercials in each profitable places.

“This is very good opportunity for government to use administrative resources. Outdoor advertising is transferred to private company, which is fully monopolized by the government and they use it for their own benefit. They do not give the opposition an opportunity to place commercials in entrances of the metro, on public transport, which are the best places to place ads, and this is yet more proof that the government uses all kinds of levers,” Manana Nachkhebia says.

She explains that it means there are unequal conditions before the election in the country.

“We plan to raise this issue at the next session of the inter-agency commission. This is not a violation by the law, but in fact this is a violation and a serious violation, as the government has all the administrative resource and uses them very successfully.”

The Christian Democrats speak of the same problem.

Levan Vepkhvadze, who represents this party, says that the ruling party is free to fully use outdoor advertising under the current legislation.

Kakhi Kakhishvili, chair of an organization which works on election issues, agrees with him.

He says creating equal conditions for parties means that these billboards and advertisement spaces should be equally distributed, and owners of billboards should see to it.

“Each company which has exclusive right to place commercials should have obligation to follow fair principles,” Kakhishvili explains. “This is a resource for the country and a right of the Georgian population, and so if the company has this right, it is also obliged to fully provide distribution of commercial locations.”

A group of experts has been proposing to the government to adopt legislative regulation, which would define locating election commercials and conditions to it; it would also define the limit of price and that one election subject wouldn’t have been allowed to use more than one third of outdoor advertising.

But the government rejected the idea.

“We see the closed circle where there are involved different government bodies to create conditions for the opposition and the government to appear in unequal conditions even in regards of commercials.”