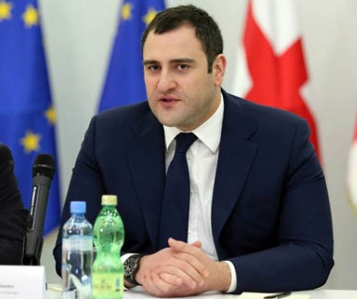 TBILISI, DFWatch–Georgia’s Interior Minister says the National Movement is preparing a Euromaidan scenario in Georgia and that he has information that they have already started collecting tires.

Interior Minister Alexandre Chikaidze said in an interview with the newspaper Prime Time that the party of former President Mikheil Saakashvili, who recently participated in the protests on Independence Square in Kiev, may try to destabilize Georgia.

Chikaidze did not name his source and how trustworthy the information is.

The National Movement Party has claimed that the Georgian Dream coalition government is acting on the orders of Russian President Vladimir Putin when detaining and questioning former government officials, arguing that the aim is to interrupt Georgia’s western integration.

The government, however, has declared that it supports the country’s western orientation and points to its preparations for signing the Association Agreement with the EU. The agreement is expected to be signed by June this year, and some theorize that Russia will attempt to interrupt the signing like in Ukraine.

Government officials have habitually denied that there is such a risk, but recently they changed their position and started saying that there is a danger Russia will try to derail the signing, but the government will do its best to implement Georgia’s Euro-integration without interruptions.

This comes as several small groups, which are well-known from years ago for having views sympathetic to Russia, have tried to hold several demonstration, but been attacked by crowds who suppressed them violently.

Some people think the sudden springing to life of these small Russian-leaning groups is organized by members of the National Movement in order to create a perpection of threat, to mobilize people for their own protests against Russia.

In the Prime Time interview, Interior Minister Chikaidze says the UNM is working on a Euromaidan scenario and are even collecting tires. He said what happened in Ukraine is the result of a government rejecting democratic and European values. There are no such signs in Georgia, he continued.

“On the contrary – we are signing the Association Agreement in June and this will bring us closer to Europe,” he said, adding that compared to previous years, there is two to three times better human rights protection, and also better protection of privacy and of freedom of opinion.

“But there is certain information: you known the former president spoke about the idea of a Euromaidan and they say this issue is also discussed in the party. There is also information that they havev started buying tires,” the interior minister added.

He said the plans includes setting up groups of people with a criminal past.

Deputy Foreign Minister Davit Jalaghania said Monday that the ministry has no information about UNM planning to implement a Euromaidan scenario in Georgia.

“Order and stability in the country is a goal and the duty of relevant authorities. He probably had some basis for speaking about such an assumption,” he said, but avoided further comment.

Irina Imerlishvili, Secretary of the Security Council, said that the Georgian government is prepared to get through the crisis such a scenario would entail.

She said the Georgian people chose to move toward NATO and she hopes that there won’t be any disturbances in the country.

“I want to address society: there is no tension and nothing alarming, but we have to take different measures for the moment when Georgia will sign the Association Agreement and Georgia was introduced as a stable country for the upcoming NATO summit,” he added.

Members of UNM say the interior minister’s statement has nothing to do with reality.

“As for the content of this statement I can say that Euromaidans aren’t organized by opposition, but by government. If the government takes steps which will be unacceptable for people it means that they will organize Euromaidan themselves and the opposition has nothing to do with it,” UNM member Davit Darchiashvili said.