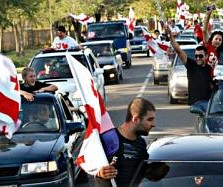 The party, which was voted out of power in 2012, is demonstrating against the government’s economic policy, and calling on the government to step down.

The rally in Tbilisi will start at 16:00 on Freedom Square where a stage is already installed.

Activists are posting photos showing columns of cars approaching the capital from different regions of the country.

Mariam Sajaia, a young MP from the UNM, posted photos and videos on her Facebook page showing cars moving from the Samegrelo region in northwest Georgia.

Giorgi Kirtadze, another UNM representative, claims that more than 2,000 people are coming from the Adjara region in the southwest, saying that most of people are travelling by their own cars, but the party helped some of them with fuel.

A column of cars is approaching from second largest city Kutaisi as well.

Prime Minister Irakli Garibashvili on Saturday responded by saying that people who come to a UNM organized rally are ‘crying for the past.’

“A few thousand people are gathering today in Tbilisi by force and money,” he said during a Novruz Bayrami event, a celebration of the New Year and Spring coming, in Marneuli, a small town where the majority of people are ethnic Azerbaijani.