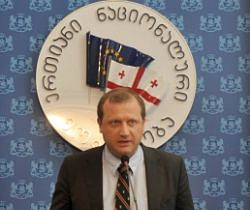 TBILISI, DFWatch–Georgia’s former ruling party, the National Movement, is preparing to take to the streets this spring in a change of roles since a few years back.

The call comes after the government refused to show up in parliament on Saturday to debate an over 30% drop in the value of the national currency, the lari.

UNM’s leading activists argue that Georgia is on the edge of economic collapse, and that the drop in the lari rate will influence every family in the country.

They accuse the government of not having a clear plan for how to get the country out of the crisis.

Street demonstrations was how the National Movement came into power under its leader Mikheil Saakashvili in the bloodless Rose Revolution in 2003. But in later years, as its popularity dropped, the party clung on to power despite the biggest street demonstrations the country has seen in modern times.

Japaridze announced that the first anti-government rally will be held on Rustaveli Avenue in Tbilisi March 21, calling on everyone to come and demand that the government steps down.

On Saturday, not enough members of parliament showed up to have a valid vote, a so-called quorum, and the special session, which UNM had called, was therefore cancelled.

“The government of Georgia, as well as parliamentary majority acted irresponsible and didn’t show up for the session,” MP Zurab Japaridze said on Saturday.

76 MPs were needed to show up on the session on Saturday; however only 42 MPs registered as present. All the Georgian Dream coalition MPs were absent.

The National Movement was planning to introduce a 36 step anti-crisis plan to parliament and government.