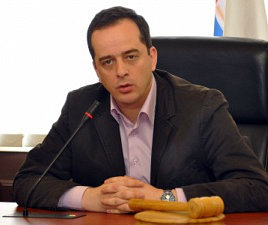 TBILISI, DFWatch–President Mikheil Saakashvili’s United National Movement has lost its majority in Tbilisi City Council after one of its members on Monday decided to leave the UNM faction.

UNM used to have 24 seats in the Council and this way remained in majority, but now there are 23 UNM members and 24 that are members of various other factions or remain as independents.

It was Koki Ionatamishvili, the former chair of the UNM faction, who Monday decided to leave the faction, announcing his decision on Facebook.

The long statement reads that the latest actions of the party have disappointed him, but he also adds that he doesn’t plan to participate in staff changes at Tbilisi City Council, announced by the Georgian Dream.

In his statement Ionatamishvili criticizes not only UNM, but also the ruling coalition, which in his opinion should fulfill its promises instead of engaging in political persecution. The statement mainly focuses on video footage and secret surveillance of people’s personal life by the previous government.

“I completely share the responsibility for each of those facts, which humiliated and insulted some people and violated their rights,” he writes.

He told journalists on Monday that he doesn’t plan to join Georgian Dream but will remain as an independent representative.

At a briefing on Monday, Davit Sakvarelidze, member of UNM, said that this is Ionatamishvili’s choice and that many people ‘cannot bear terror in politics.’

“Many have willpower, many don’t,” he said. “We continue to fight with co-fighters with whom we have hope. There is no tragedy in this.”

However, Tbilisi Mayor Gigi Ugulava said he thinks the decision was ‘incorrect and far from moral.’

“I think this might have been a beneficial decision personally for him and he may find some profits in it, but I also think his action seen from a friendly or collegial angle is incorrect and far from moral,” Ugulava said.

After the parliamentary election in October 2012, a number of members of parliament and local government representatives decided to leave UNM and join Georgian Dream or continue as independents. In the beginning of April 2013, UNM also lost its majority in Kutaisi, Georgia’s second largest city and seat of parliament.