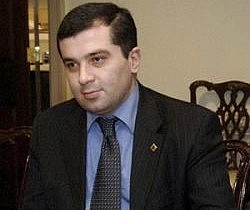 Davit Bakradze, former speaker of parliament for the National Movement, said in Strasbourg that two more MPs from his party, Tariel Londaridze and Kakha Butskhrikidze, have been called in for questioning at the Prosecutor’s Office, which he believes is done to harass them.

The Prosecutor’s Office has called Davit Sakvarelidze, also from the National Movement, in for interrogation several times, but he never showed up. Under Georgian law, an MP has immunity and if he refuses to give testimony, the Prosecutor’s Office will have to get permission from parliament to force him to come. No such appeal has so far been sent to parliament.

Now, David Bakradze claims that the harassment of parliament’s minority members is continuing and he thinks this is related to the procedure of adopting constitutional amendments.

Two constitutional amendments are under review, but to pass the changes takes at least 100 votes out of 150. The parliamentary majority is 9 votes short of having enough votes. But still, they hope they will be able to get the necessary votes, when drafts will be presented to parliament for voting, which will probably happen in February.

The leader of the parliamentary minority says that Ivanishvili’s government is trying to scare them.

He appealed to law enforcement bodies and called on them to follow the rules for how to call parliament members in for interrogation.

The Prosecutor’s Office has so far not commented.