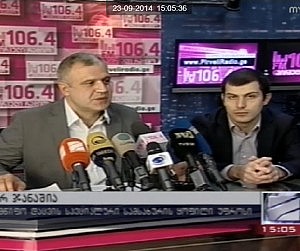 TBILISI, DFWatch–After slapping an asset freeze on former President Mikheil Saakashvili, the Georgian Prosecutor’s Office got court approval to do the same with the property of his almost inseparable head of security, Temur Janashia.

Sitting next to his attorney at a press conference Tuesday, Janashia objected to the prosecutors’ decision, which according to him includes a bank account containing his pension, which he said is his sole source of income.

Later, the Prosecutor’s Office issued a statement denying that Janashia’s accounts have been frozen, and accusing him and his lawyer of deliberately lying to the public.

The statement also notes that it has frozen several accounts, different from the account in Liberty Bank where Janashia gets his pension, containing a total of USD 270,000 which, prosecutors claim, Janashia didn’t include in his property declaration as a public servant.

From 2010 to 2013, Janashia was head of the Special State Protection Service, which is responsible for the personal security of the president and other high level officials. SSPS also protects some strategic sites.

The head of the SSPS has the rank of major general, which in the Georgian armed forces and police is above colonel and below leutenant general.

While serving, Janashia used to follow Saakashvili around many occasions, both inside Georgia and abroad, and visually became a fixture for TV audiences.

Janashia and his lawyer Beka Basilaia said authorities have frozen a bank account which is used by Janashia to receive his pension, his sole source of income amounting to 560 lari (USD 320).

Janashia, who is charged with embezzlement of a total of 8.3 million laris, said that the charge is ‘totally far fetched’ because it includes all the expenses of the former president, including renting cars during his visits abroad.

“Maybe it would be better for the sake of the state budget economy to move our cars by plane,” Janashia said sarcastically.

According to his attorney, prosecutors also seized the property of Janashia’s family, underage children, wife and mother-in-law.

Janashia was charged along with Saakashvili with embezzlement of public money for unnecessary expenses.