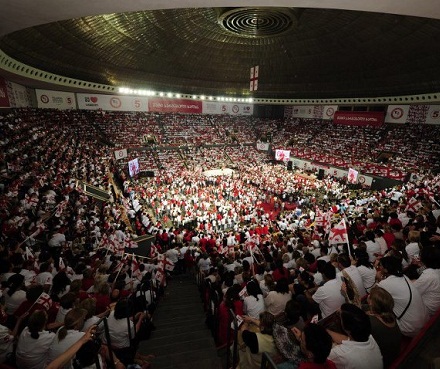 United National Movement, the party which came to power after the rose revolution in 2003, rallying in Tbilisi Sunday, ahead of the October 1 election. (UNM.)

TBILISI, DFWatch – The two largest political blocs in Georgia in the weekend showed off their support in the regions.

United National Movement, the ruling party, Saturday held eleven rallies in ten towns as well as in Tbilisi. The first gathering started at 11:00 in Zugdidi and was followed by events in the country’s other cities and towns like Batumi, Gori, Telavi, Rustavi and a capital Tbilisi.

Each rally by the UNM started with a concert. The streets were full of people dressed in red and white t-shirts holding flags. 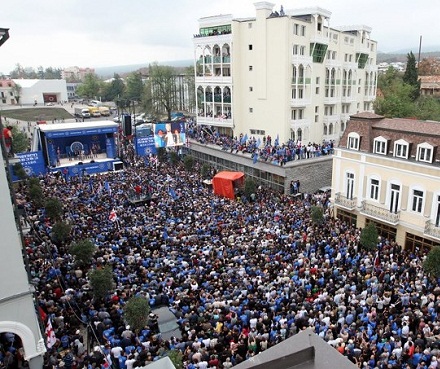 President and party leader Mikheil Saakashvili managed to visit three towns on Saturday and held speeches to his supporters gathered there. The prime minister, parliament speaker and other leaders also participated in the gatherings.

The last gathering was held at Tbilisi’s Sports Palace in the evening.

Sunday evening, the largest opponent to the government, the Georgian Dream coalition, held a rally in Telavi, a city in the Kakheti region in eastern Georgia.

Bidzina Ivanishvili, leader of the coalition, introduced his majoritarian candidates for the region. Tens of thousands of people attended the event, according to Georgian media.