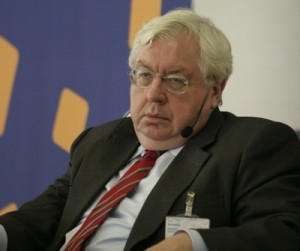 This letter was published January 21, 2014, in The Tufts Daily, a student newspaper at Tufts University.

I was distressed to read in your newspaper that former Georgian President Saakashvili had been appointed as a so-called “Senior Statesman” at the Fletcher School. This appointment is not only an example of bad judgment by Fletcher’s new dean, but it is even more a disservice to Fletcher students and to the entire university community. Saakashvili can in no way serve as an example for future diplomats and business executives.

I am a former American Ambassador and Assistant Secretary of State who served as a foreign policy advisor to Saakashvili’s opponent in the October 2012 election for Prime Minister, which was conveniently not mentioned in Fletcher’s announcement. The reason for this omission is probably the fact that the 2012 election resulted in a resounding vote to transfer power to the Georgian Dream Party, even though the President and his party spared no effort to use the tools of government to block the campaign of challenger Bidzina Ivanishvili. Ivanishvili is a businessman who entered politics in an effort to end the repeated violations of civil rights, government violence against citizens and economic decay that characterized Saakashvili’s rule.

I was on hand during the final dramatic weeks of the 2012 election and can attest personally to the ruthless oppression of freedom and violence against campaign workers that I observed. The fact that over 60 percent of the Georgian population was able to vote against Saakashvili is not only a testimony to Ivanishvili’s courage, but also to the support of Western governments who made clear to Saakashvili that he would not be allowed once again to steal an election.

Fletcher’s new dean appears to be part of a group of senior military American officials who supported Saakashvili, whatever his crimes, because of his pro-NATO credentials. I am sure the dean will defend his decision, whatever facts may emerge. But Fletcher students and faculty can help achieve a positive result for this sad event, by ensuring that Saakashvili’s appearances result in a full and honest discussion of his legacy. Read about recent Georgian history; learn about Saakashvili’s treatment of prisoners, his ruthless suppression of demonstrators in May 2011 and the corruption and personal enrichment that infected his entire regime. Above all, force him to tell the truth. By so doing, you can help ensure that this bizarre appointment will at least have served as an example of how freedom can, in fact, win out over post-Soviet dictators such as Saakashvili in the strategic regions bordering on Russia.