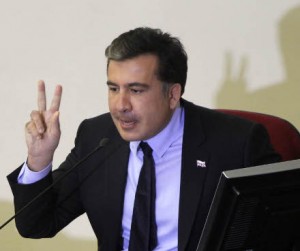 "Where there are economic relations, there is no place for tanks,” Georgia's president Mikheil Saakashvili says, and lifts visa rules for all Russians. Today, citizens of Russia's seven northern Caucasus republics can enter Georgia without a visa. (Photo: Interpressnews.)

Saakashvili was holding his annual speech to parliament about the state of the nation.

“I have an new initiative to unilaterally cancel the visa regime with Russia,” the president said.

He explained the move as a way of creating good neighborly relations between the Georgian and Russian people.

He remarked that it is decided to unilaterally do away with the visa rules for Russians because ‘all the Russian businessman will know that they can arrive in Georgia, invest and do business.’

“They should know that they will be secure here and will be able to freely move as the other countries’ representatives can. Let all Russian citizens know that they can come to our country, which is different because it is free from corruption, violence, human indignity, bureaucratic pressure, and Russian tourists should know they can arrive in Georgia any time, any time they can warm themselves in the sun on our beaches, any time enjoy our hospitality, and no one will restrict them from drinking the so missed [mineral water] Borjomi and Georgian wine.”

In 2006, in the wake of Georgia arresting four Russian diplomats and accusing them of being spies, the Russian government prohibited the import of Georgian wine, the mineral water Borjomi and other products due to sanitary issues. This was a heavy blow for the Georgian economy. What is often called the Russian wine embargo was followed by the eviction of ethnic Georgians from Russia, a decision which led many to see the embargo as part of a political tit for tat.

As for visa regulations, Russia in 2000 established visa-free travel for Georgians, but it didn’t apply to the population in Georgia’s current breakaway regions South Ossetia and Abkhazian, areas which are currently occupied by Russia. In addition, during that time Russia itself recognized these two separated regions as being part of Georgia. In 2003, Russia simplified the visa rules only for the population of the Adjarian Autonomous Republic, without holding consultations with Georgia. Adjara was reintegrated into Georgia in 2004.

After the war in August 2008 diplomatic relations between Georgia and Russia were broken; however the visa rules continued to stay in force, and people have been able to travel back and forth, though not without difficulties at first because there were no direct flights and no border crossing. Travel has gradually been made easier. Today there is both direct flights and common border crossing.

In October 2010, the Georgian government decided to let Russians in the seven republics in North Caucasus come freely to Georgia without a visa and stay for 90 days. Those republics are: Chechnya, Ingushetia, North Ossetia, Dagestan, Kabardino-Balkaria, Karachay–Cherkessia and Adygea.