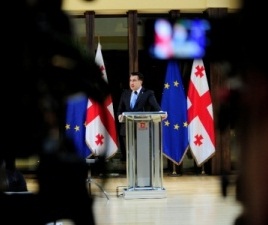 TBILISI, DFWatch — The Georgian president says he will veto a new bill to reform the oversight of the justice system.

He said parliament is reviewing a bill which will place the Council of Justice and the courts completely under the control of the government, which is no longer controlled by Saakashvili’s party.

The goal of the bill is to improve the process of disciplinary litigation and modernization, and provide more transparency. The bill focuses on how to appoint members of the Council of Justice, as well as the assignment and disciplinary reactions for judges.

The bill also foresees the possibility of suspending justice council members before the end of their term.

Only the Supreme Justice Council will have the authority to implement preliminary audit and research into disciplinary cases.

In his TV conference, President Saakashvili said that if judges would want to defy the prosecutor in a trial, or defy the prime minister or the justice ministry, they won’t be able to.

“I want to tell MPs that they know the Venice Commission demanded to postpone the review of the bill, but if the bill remains, I will use my presidential powers and veto this bill,” he said, adding that this will assist the independence of the courts.

The president thinks the new government will put pressure on the courts.

“We know well what the prosecutor’s office needs from the court. The cases which they present are shameful and weak. They need to detain all who goes to court.”

Parliament had a first hearing of the bill on Thursday.

Koba Davitashvili, MP from the parliamentary majority, responded to the president’s statement by saying: “If the president wants to move to open confrontation with the new government, he will get confrontation.”

The MP thinks the new bill envisages amendments which on the contrary will provide for the independence of judges, which is what the president doesn’t want to happen.

“If Saakashvili stops cohabitation and moves to confrontation with the new government and Georgian Dream, he will receive an appropriate response,” he said.

“If he brings 200 persons to the streets we will bring 200 000. If he makes use of his veto powers, we will overcome the veto, and if he wants confrontation, we will give it to him.”