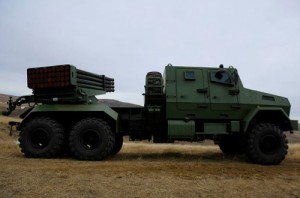 Saakashvili says Georgia will be able to acquire Grads at a quarter of the price by producing them domestically. Grad multiple rocket launchers were used against civilians in the 2008 war in violation of international law.

According to the EU’s investigation into the August 2008 war, he ordered his army to use Grads, also known as Katyusha, to shell the city of Tskhinvali, hitting civilian targets.

Although many had been evacuated already, more would have left before the attack if it had not been for a TV address by Saakashvili the previous day declaring a unilateral seize-fire.

Many former East Bloc countries produce their own modified versions of the Grad, an old weapons system first developed during World War 2. The Georgian version demonstrated to the media at the Vaziani base outside of Tbilisi Saturday is similar to the Polish version. It has a heavily fortified cabin, from which the rocket system can be operated remotely, cutting drastically down on the time to load, target and launch.

The Grad is typically used to quickly deploy and leave the firing position in order to not be targetted by the enemy. Georgia’s Grad vehicle has a top speed of 80 km/h. It takes only 20 seconds to fire all of its 40 rockets in one stack. Range is 40 km.

President Saakashvili said work on the vehicle, which is being built at Camp Delta, went on until right before Saturday’s unveiling, because there were problems with the liquid fuel.

He said producing the vehicle domestically will cut the price to a quarter, and an armoured attack vehicle unveiled the previous week is also cheaper and better than importing, Saakashvili stressed.

“Our armored caterpillar vehicle is three times cheaper. Secondly, you are not any more dependent if anyone lies to you, or share the information to someone or refuse you in decisive moment and stop supplying. This is also great export product. This is yours, you do and that’s why it is more secure, especially for a country like ours,” Saakashvili added.

Defense Minister Akhalaia said that Georgia historically had suffered a shortage of artillery vehicles. “From now on we can say that the sophisticated artillery system presented today will meet our armed forces’ requirements to a maximum extent, after which we will think about further development and advancement in this direction”, Akhalaia said, according to the defense ministry’s website.

Four years ago, following a series of hostilities escalating during summer, Georgia used Grad multiple rocket launchers to shell the city of Tskhinvali the night between 7. and 8. August 2008. “It is not possible to accept that the shelling of Tskhinvali during much of the night with GRAD multiple rocket launchers (MRLS) and heavy artillery would satisfy the requirements of having been necessary and proportionate in order to defend those villages,” wrote the EU’s Tagliavini commission. The commission found that the use of the Grad system, an indiscriminate weapon which means it is hard to predict exactly who and what will be hit, was unjustifiable under international law.

Human Rights Watch has documented that Georgia’s use of Grads led to civilian deaths. Also Russia used indiscriminate weapons against civilians in the August 2008 war.